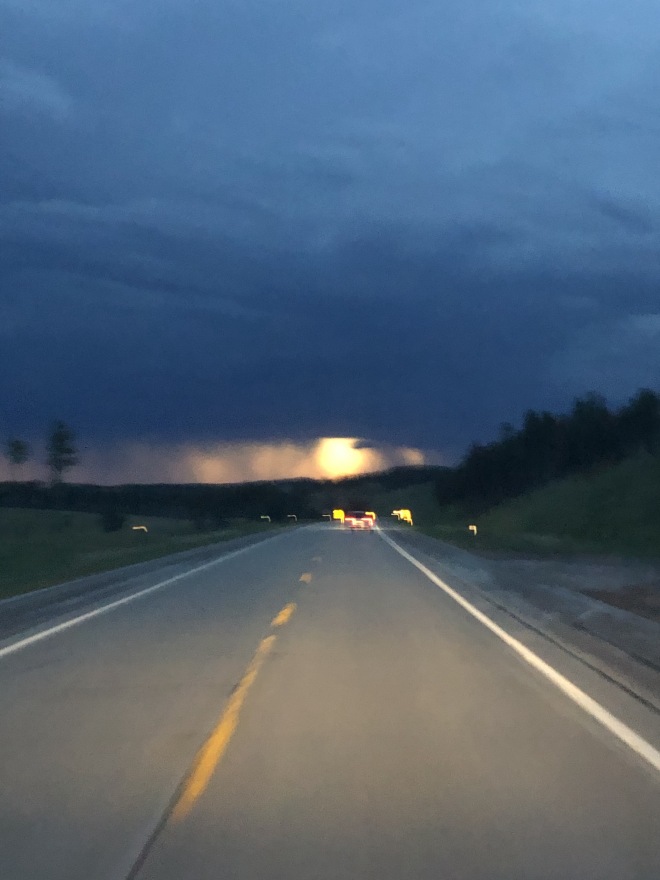 What are your stories of memorable storms?

The hand-painted signs pop up politely as you enter South Dakota.

They evoked the scents of leather, cinnamon sugar, hot coffee. I pictured post cards, stickers, souvenirs. I saw a collected mass of humanity.

“No. No, we cannot stop at Wall Drug,” I told myself. We have a ten hour drive on our hands – some 500 miles to The Buffalo Inn – and we have no business risking our lives in COVID crowds.

Alongside the hot asphalt highway west of Sioux Falls, tall prairie grass grows lonely except for the endless parade of out-of-state motorists. We passed by another Ingalls homestead. I noticed the hand-painted  signs were now big as billboards and frequent as telephone poles. They were bold. They were weird.

Free, mind you, because, like shade trees and locals, cold water out on the prairie is hard to find.

“Let’s stop at the Corn Palace real quick,” I requested an hour into the drive. We were at Mitchell and due for a pit stop anyway. We drove through town until I  saw that old, infamous building which was swagged with a mural of Crazy Horse, one of its few actually finished scenes. 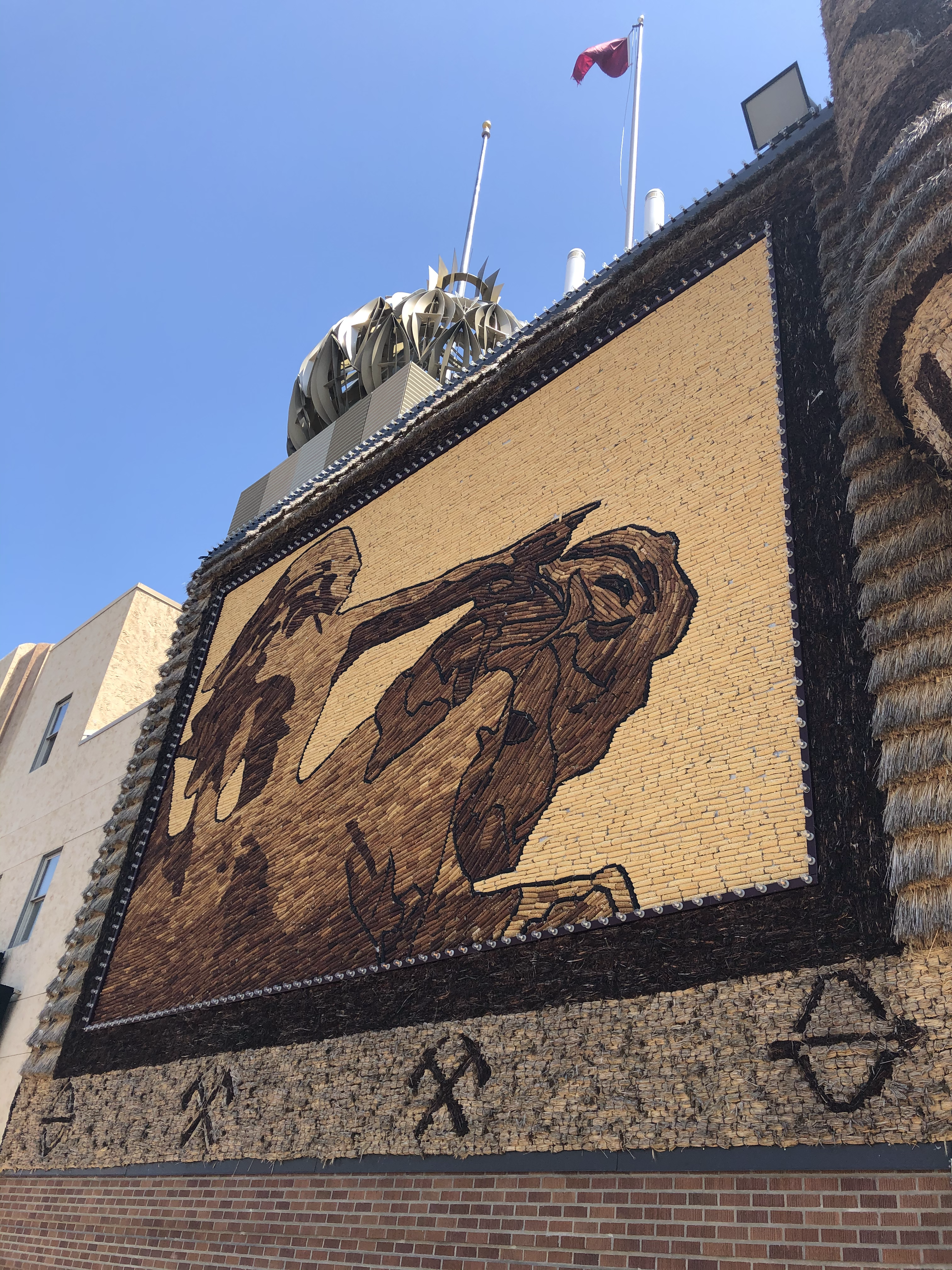 “That’s all corn,” I told Zach. We marveled.

Now, according to Corn Palace History, and good old fashioned deductive reasoning, the World’s Only Corn Palace was created to celebrate agriculture and the occasional basketball game. The gymnasium floor was well stocked with corn-shaped goods and corn-flavored candy, except they didn’t have the kind of candied corn lollipop I got the last time I visited in 1999. And there were people. Unmasked people. Everywhere.

“Let’s get out of here,” I said while the scent of hand sanitizer still sterilized public air.

Back on I-90, miles turned into hours. The sun was red-hot behind swaths of swift moving clouds. Wind whipped and rain pelted the windshield. The signs were warnings, now; the Wall Drug Store was mere exits away. I checked the map. We had only come half-way, but Wall Drug and all its statewide advertising did what it always does. And who could know what there was to eat between Wall, South Dakota and Buffalo, Wyoming?

I parked the UHaul alongside RVs and trailer-towing trucks and we masked up for Wall Drug. Decades later, Zelzar still tells fortunes by the restrooms, a room crammed with cowboy boots still smells of leather, and T-Rex still moves mechanically near the six-foot rabbit where people pose for photographs. I noticed for the first time the mechanical cowboy troupe was the work of Mr. Hockaday himself. 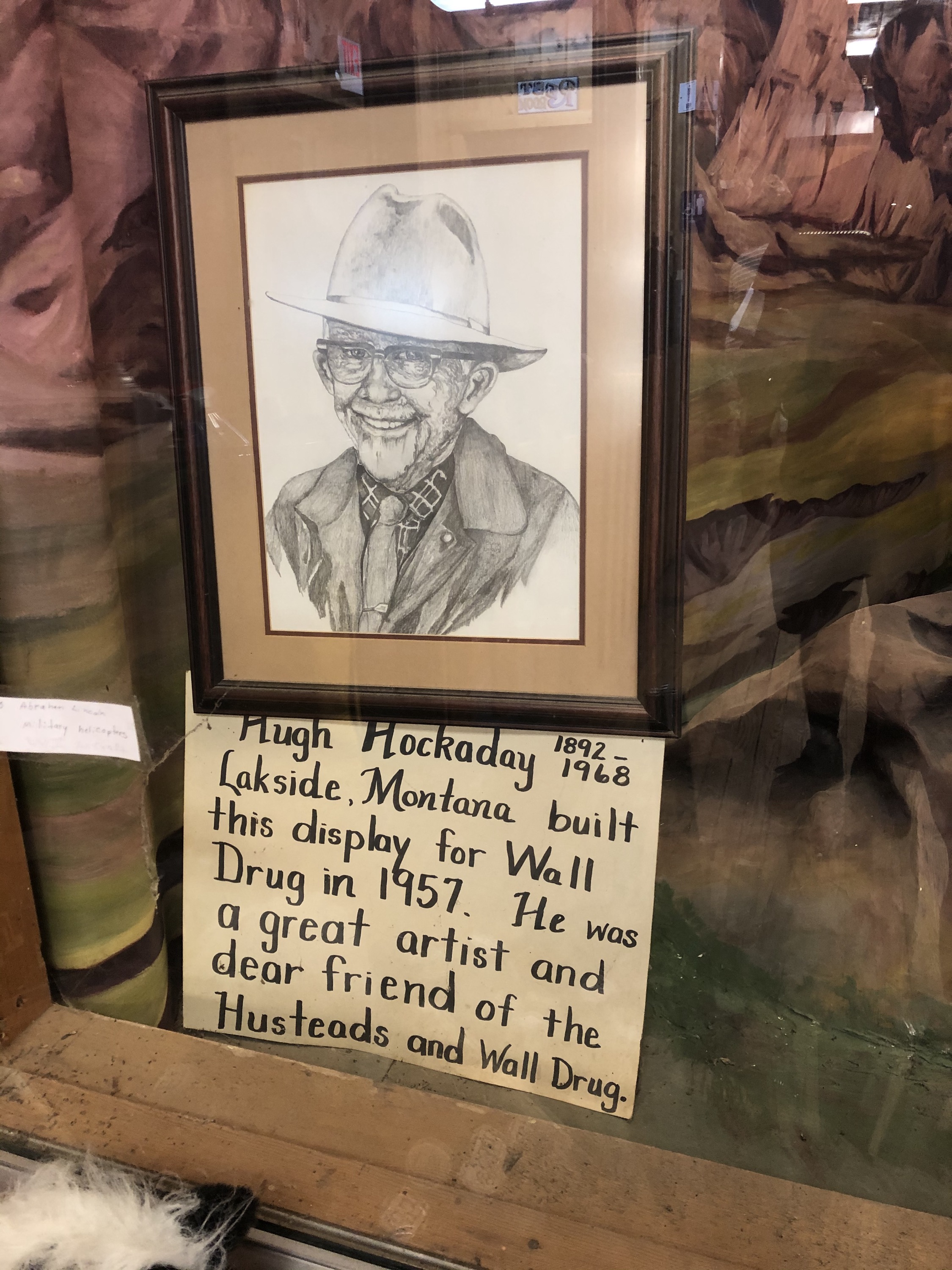 The restaurant was buzzing. Tourists from all across America were gathered to hear their numbers called. They were unmasked and passing ketchup bottles to neighbors at full tables. We shared a doughnut, Zach tried the free ice water, and my breath felt hot in my mask.

I mailed a birthday postcard to my brother-in-law, grabbed my free bumper sticker, and retreated into electric air. The storm was large and looming over Mount Rushmore where just yesterday Lakota protestors had blocked the road, though it seemed they’d pulled off a big rally anyway.

“Let’s see Rushmore,” was Zach’s request, and when you’ve gone to see a palace made of corn and a talked-up drug store turned tourist trap, why wouldn’t you go see presidential faces carved out of the Black Hills? As a clever sign once wisely  said: YOLO.

I drove the moving truck right up to the entrance of the monument – imagine, the contents of my entire house – where I impressed the veteran directing traffic. “Well, can you park it down behind that RV?” After the elevation gain between Keystone and Rushmore, I felt I could do anything.

It was a crawling anthill of people from almost every state. I saw Trump supporters opposite the protestors, and in the shadow of four sentinel figureheads, the Trump rally grandstands echoed and flashed from the lights of a dozen cell phone cameras. We walked the cooled coniferous pathway to the base of the famed rock-face. 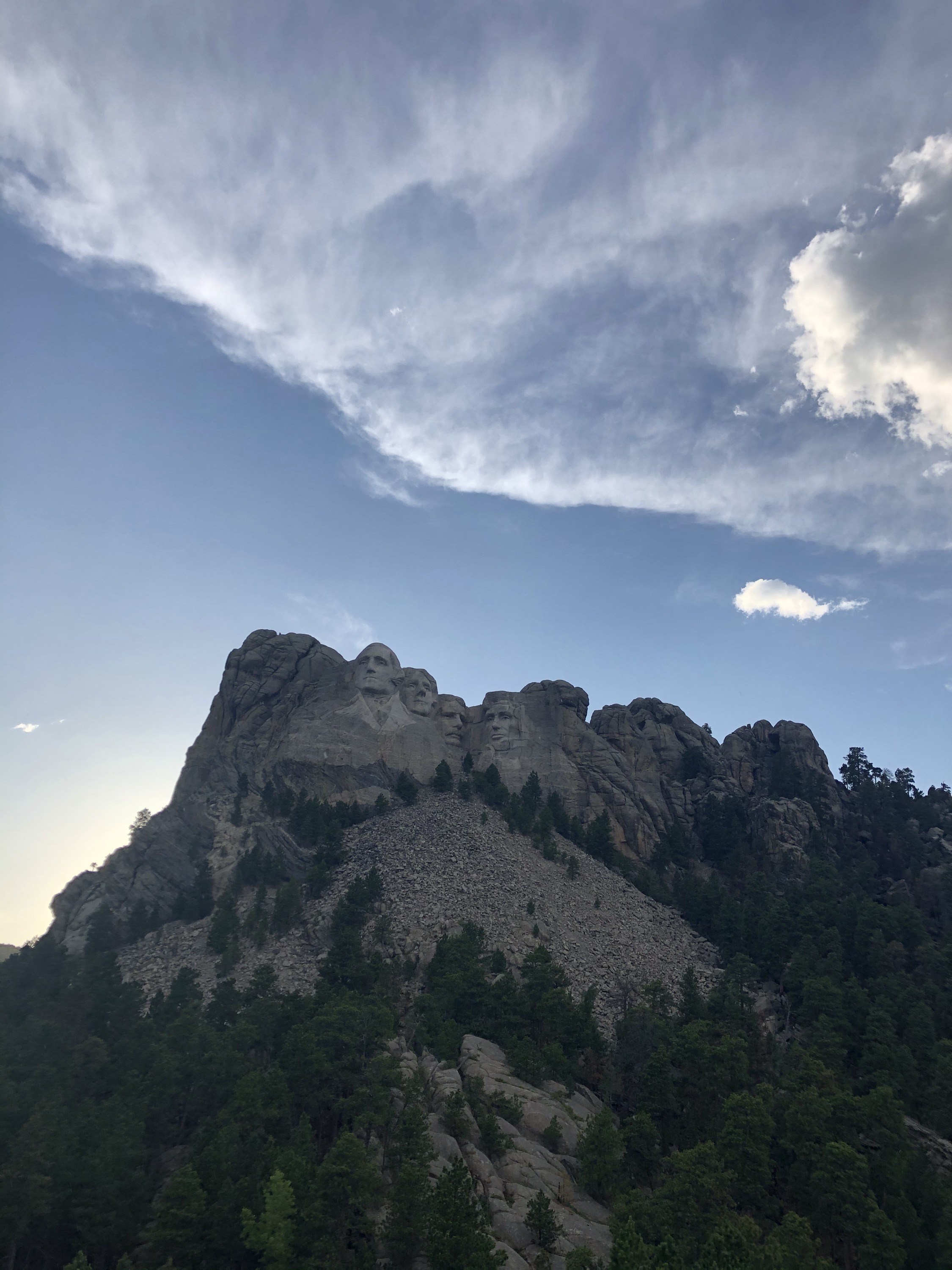 I remember the sight of their profiles as we drove down the mountain, and the quick view of unfinished Crazy Horse. We turned to go the back way to I-90. It seemed better to not back track with 200 miles left to traverse

The Black Hills are enchanting in the rosy dusk hour when tall pines fade to deep greens and misty blues. Orange stone fades to white and then to shadow. I felt the engine break every once in a while and listened to the radio. Storm clouds blazed a dangerous black in the last light of day. Lightning made the radio crackle. Huge bolts touched down all over. God’s fireworks for America’s birthday. I caught sight of the Super Moon. 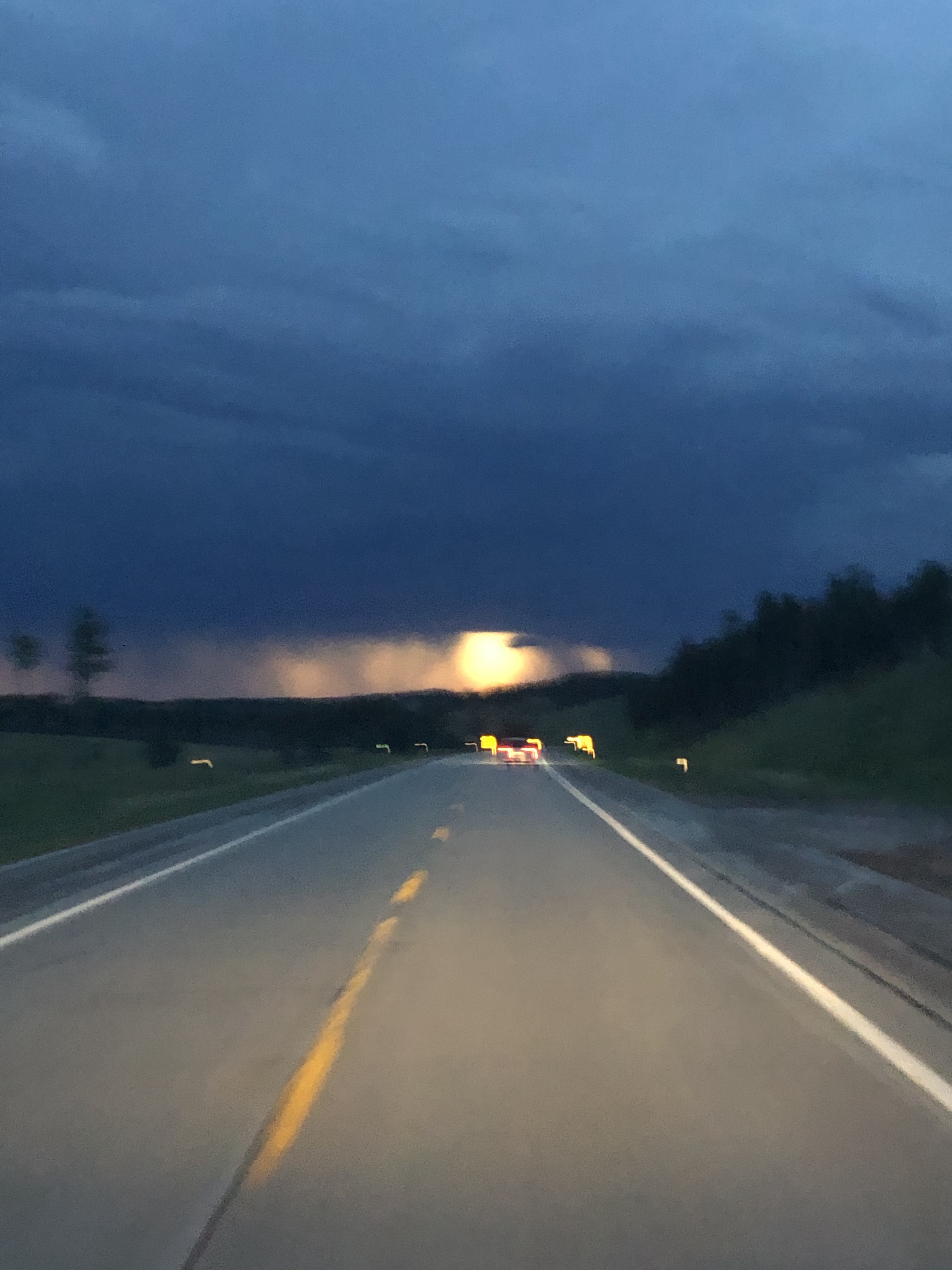 Then everything went black.